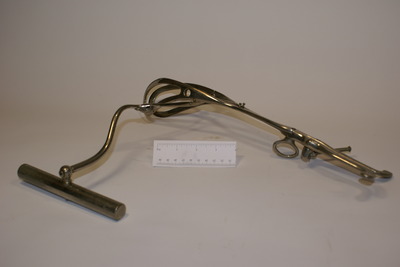 The uterine forceps was developed by Peter Chamberlen, the obstetrician-surgeon to Queen Henrietta wife of King Charles I of England. It was created to help in the most difficult childbirths by rotating an infant’s head when the woman was fully dilated. This instrument assisted in preventing infant deaths and was used when all other persons had exited the birthing room and the mother had been blindfolded. It has been written that the uterine forceps was kept a secret by the Chamberlen family for 150 years. This particular instrument may have been created in the 1850’s as American forceps originated from English forceps that are shorter than long French forceps. Short forceps were used when the fetal head has moved down the pelvis. The long forceps are used when the fetal head is in the middle to upper part of the mother's pelvis. Used in New York, New York, United States.