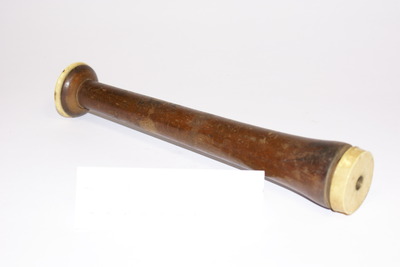 Sounds made by the human body have long been considered clues to detecting disease. In 1816, the French physician Rene Laennec invented what we know today as the stethoscope while examining a young female patient. Laennec was too uncomfortable to perform the widely practiced procedure of immediate auscultation, which involved the physician placing his ear to the patient’s chest. Therefore, he rolled up 24 sheets of paper, put one end to his ear and the other to the woman’s chest. He was overjoyed when the sounds were precise, loud, and clear. The first stethoscopes were made of wood and were in two pieces, as shown, so they would fit in a physician’s bag.